Articles regarding THE SKI STREAK

Click photo on right and you can read
this article while a larger and more detailed picture
of Snowbird loads. It is impressive and worth it! 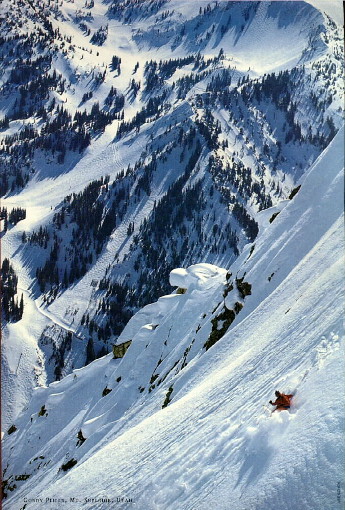 It was just a few years ago that I decided to learn how to ski. Simple curiosity prompted my interest--I kept seeing cars at the canyon entrance on snowy days, waiting for it to open so they could drive into more snow! It seemed so crazy that I just knew there had to be something more to it. Skiing has since become my favorite sport. But, as with many other ventures in my life, it too, may have reached an extreme.

Let me explain..At age 12, my parents moved us from a little town to the big city. It was over 120 mountainous-miles away. Just before the move, I announced that I was going to ride my single-speed, paper-route bike to our new house. My parents had long ago given up trying to talk me out of such things. Like the time, at age 8, I brought home a bag of red rocks. I was thoroughly convinced that I could turn them into liquid mercury in our kitchen oven. If they couldn't stop me from almost burning down the house back then, certainly they weren't going to stop me from a bike ride. That ride took me 12 hours and two flat tires, but turned into one of those formative life experiences.

It may have also been a meaningful step towards a headlong fascination with skiing. Learning to ski or snowboard requires a certain stubbornness. Otherwise, one wouldn't make it through the pain and humiliation of learning while awaiting the later reward.

Not long after learning how to ski, a friend and I were joking about how fun it would be to golf and ski in the same day. That, in turn, led to the idea of doing as many sports as possible in a day.

Together with Nick Nelson, Henry Holmes, Kent Cram, Lynn VanRoosendaal, Jim Reese, and myself, we all completed 13 sports in one day. The day comprised of scuba, parachute, snow-ski, water-ski, golf, canoe, cliff-rappel, horse races and more. According to Guinness and USA Today, no one had ever accomplished that many different, official sports in one day. The following year, we doubled the day with 26 sports to put the record out of range for anyone else.

Through all that, I got completely hooked on skiing. Out of all the other possible sports, it was skiing that was most thrilling. The long days of summer became agonizing. I began having summer nightmares: schussing down a run, groomed to "corduroy" perfection, only to be interrupted by the clock radio announcing that it's already eighty degrees during morning rush hour. I missed the squeaky, creaking sound that snow makes at about zero degrees. I was longing for those perfect powder days when the sun tries to poke through a sky filled with the sparkle of shimmering suspended jewels. I was desperate for chilly air, for turns, for my life to be complete again.

So, in such a stricken state of mind, just before Halloween of '92, I threw my skis in my car and headed up to Park City. They had been making snow for a few nights. I needed to ski. It was a kick skiing at sundown, out of season, with the whole run to myself! I decided right then and there to ski every week that season. I would ski somewhere, anywhere.

I had no idea at the time, but it was the best year I could have made such a resolution. It was an unbelievable snow year! The snow stayed through the entire summer of '93. I skied places in August and September that old-timers told me had never held snow past July. I'll never forget skiing a remnant patch of snow near the mouth of Little Cottonwood canyon on the July 4th weekend, causing a mini traffic jam of double-takers. It was the beginning of my endless season.

Nothing beats shredding down a mountain for the sustained rush. Give me a snowy slope and something to slide on and we're talking mania-no matter the time of year.

Then, in August of 1994, I climbed to my favorite snow cache and it was gone. What to do? There, stuck in the summer heat, my string of weekly turns (nearly two full years) melted into a mud puddle. As I hiked down the mountain with my skis on my shoulder, I resolved if I couldn't ski weekly, I'd ski monthly.

I had skied the volcano at Mt. Hood, Oregon, the previous September on Labor Day. It was quite surreal; weaving silky turns between exposed lava rock and flying down Olympic training runs. It was a revelation to meet dozens of others with the same affliction as mine- terminal ski addiction. I decided Mt. Hood would become my annual ski tradition as I trudged the 2½ hours back down the mountain in my ski boots. (That was also the last time I ever hiked that far on a dry trail in ski boots.)

Since picking up this incurable hobby of skiing year 'round, summers definitely aren't as tedious anymore. Long ago, our neighbors stopped asking my wife why I come home on some summer nights with skis or a snowboard on my car. The streak is unbroken despite broken bones, knee surgery, concussions, and countless sprains. There have been many accidents and close calls where I've just about got myself killed.

This September will mark eight continuous years of skiing without so much as a month passing between turns.

Skiing at over 50 resorts, coast to coast and country to country, you learn a lot about snow. The light, abundant powder that fills Little Cottonwood is a rarity. Where else can you wave your hand above the surface of four feet of new fluff and create little swirls of crystalline vapor? I sometimes think it is the memory of those premium days that keeps me going on old snow until the leaves change and the first snowflakes fall. I guess I've become one of those people who seem crazy; but now I know there is something more to it.